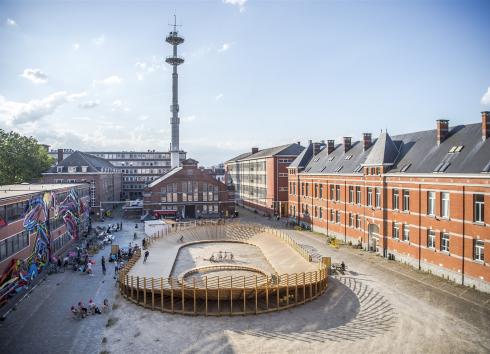 Extension of See U!

The Société d'Aménagement Urbain (SAU) has decided to extend the temporary occupation of Usquare.brussels, the conversion project of the former Fritz Toussaint barracks in Ixelles, until March 2022. The approach of the first renovation works on the site requires a redistribution of activities during these additional 15 months.

Called Usquare.brussels and piloted by the SAU, the conversion project for the former Fritz Toussaint barracks in Ixelles, which has made significant progress in recent months, aims to transform this site into a new open, mixed and dynamic, urban and convivial, university and international, sustainable and innovative district. The aim is to meet the needs of the people of Brussels, and particularly those of the local residents, particularly in terms of housing and public spaces, while at the same time hosting an ambitious project of international scope, carried out jointly by the ULB and the VUB.

The SAU, the Region, the universities and the municipality of Ixelles wanted to take advantage of the preparatory phase of the conversion to develop a transitional occupation, called See U. Objectives: to make the temporarily unoccupied spaces available to citizens, associations, cultural initiatives, etc.; to contribute to the animation of the site; to begin its gradual opening to the neighbourhood; to avoid the problems associated with abandoned sites.

In order to realise these ambitions, the SAU implemented an innovative and very open temporary occupation procedure, on the one hand to designate a transitional manager for the entire site (the Creatis / D-Side Group / Troisième consortium) via a public contract and, on the other hand, to select the first temporary occupants of parts of the site via a Call for Expressions of Interest (AMI).
Once the necessary permits had been obtained, See U temporary occupation was inaugurated in April 2019 .
The See U team has developed an ambitious programme, reaching a figure ofaround one hundred initiatives at cruising speed and an occupancy rate of 100%.
Since the opening, more than 350 activities have been organised or hosted on the site, attracting more than 125,000 visitors and ensuring the success and reputation of this temporary occupation. This has earned the SAU and the See U team a Visit.brussels Award.

Spatial redistribution of activities on the site

In view of this success,the SAU has decided to extend the temporary occupation, which should have ended at the end of 2020, by 15 months, as the departure of the Federal Police from the last building it occupied on the site will free up space for See U which will partly compensate for that lost from next autumn with the start of the first renovation works.
The SAU and the See U team have carried out an objective evaluation of all the projects developed so far within the framework of the temporary occupation, and all the project leaders have been received individually. This was done, on the one hand, with a view to carrying out the necessary spatial reorganisation of the temporary occupation activities on the site, taking into account the fact that the total surface area of the buildings available to See U is being reduced from 35,000 m2 to 30,000 m2. And, on the other hand, to focus See U's general dynamics more on projects that best promote the involvement of local residents in the ongoing transition linked to the eventual conversion of the barracks.

Gilles Delforge, the director of the SAU, "congratulates the excellent collaboration with the See U team and the quality of their work, which transformed the innovative approach to the organisation of a temporary occupation imagined by the SAU into a real popular and media success, which inspired other operators and earned See U and the SAU a Visit.brussels Award. I would like to thank all the See Users who have actively contributed to this success and especially those who are currently accompanying us in the participatory process we have launched for the design of the future public spaces of the site. I am delighted to see that the temporary See U occupation has enabled some fine initiatives to take off under good conditions, some of which are leaving the site because they need larger spaces . I am thinking in particular of Billy Bike. And more broadly, I am pleased that the SAU can contribute to making the regional land heritage available to the people of Brussels through temporary occupations, each with its own specific features: See U in the former Fritz Toussaint barracks since April 2019; MolenWest next to the West Station since September 2020; "L'Été à Josaphat" (Summer in Josaphat) on the site of the former Josaphat marshalling yard last summer.

Edouard Meier, head of the Creatis / D-Side Group / Troisième Pôle group, is "very happy to be able to continue the adventure of the largest temporary occupation in Belgium. The long-term nature of the project will allow us to further strengthen the links with the neighbourhood and the local residents, to accompany the arrival of the Usquare.brussels project, and to continue to defend the values of social cohesion and sustainable development that motivate all the occupants of the site. During the additional 15 months granted by the SAU, we will work more particularly on the positive dynamic initiated with the inhabitants of the neighbourhood by See U, with projects such as Kinograph, Haut les cœurs, Pousse et vous, Hors Catégories, Place aux plantes, etc.".

Among the flagship operations of See U that have helped to raise the profile of the site are the Velodroom, inaugurated on the occasion of the start of the 2019 Tour de France and now emblematic in the eyes of the people of Brussels; the U See Festival, an urban festival organised in partnership with the European Commission, which led to the creation of 24 monumental frescoes on the site; the U Beer Bazaar, a festive gathering of Brussels microbreweries; the Grand Marché Durable et Créatif; and the first Maker Faire of Brussels.

The coronavirus pandemic and the periods of confinement did not spare the occupants of See U. Many activities were interrupted for months, like Kinograph, for example, which stopped all its screenings from March to July 2020, then had to adapt its activities since last autumn (online sessions, exhibition...). The temporary occupation has shown great resilience and several project leaders have participated in the solidarity movement in these times of crisis. For example, Billy Bike offered free minutes on its shared electric bikes to carers and other heroes in the fight against Covid. Happy Hours Market, which provided unsold meals to Brussels hospitals. Or Hors Catégorie, which delivered medicines to pharmacies.

The See U team has devised a new programme to adapt the project to this new situation and further increase the positive impact of temporary occupation. This programme, Meet U, has been developed as a label for all See U activities organised for the neighbourhood surrounding the site. It is also symbolically the name of the space that will be made available to local residents, as soon as possible, inside See U.More info onCaserne- Usquare.brusselsDevelopmentsCaserne- Usquare.brusselsSites