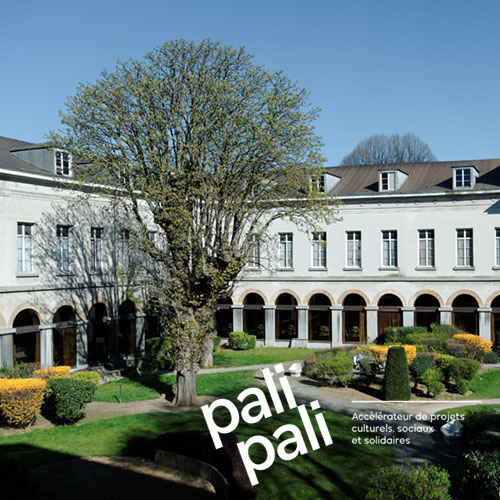 Pali pali, an accelerator of cultural, social and solidarity projects, has been selected by the CPAS of the city of Brussels to organise the temporary occupation of the Pacheco site over the next two years. The programme includes a "cultural and social third place" offering a variety of collective services and activities to the inhabitants of the surrounding neighbourhoods and beyond.

Pending major renovation work necessary for the creation of a group of housing units and collective services, the CPAS of Brussels has decided to make this site available for an innovative project with a strong social and cultural orientation, in line with the needs and aspirations of the neighbourhood's inhabitants. A call for projects was launched in early March. On this basis, the CPAS of the City of Brussels selected a project and appointed the manager-coordinator of the site.

The winner, Pali Pali, defines himself as an accelerator of cultural, social and solidarity projects. With a solid experience, he manages and activates places, accompanies projects and trains entrepreneurs. He recently developed the See U project in the former Ixelles barracks, the largest temporary occupation in Belgium, which brought together more than 100 project leaders on this site.

For its founder Edouard Meier, "the ambition is threefold: to bring together several complementary activities, to offer a mediation and reception centre for the neighbourhood and to demonstrate social innovation". The programme will revolve around seven social and cultural themes (solidarity, art & culture, education/health/sport, lab & innovation, sustainable development, social economy, living together/creating links), and will be subject to a call for projects.

The project led by Pali pali will allow the site to be opened to the public, in particular the gardens, and will involve the neighbours and surrounding associations on a daily basis in order to create a real culture of proximity. This attention to co-construction is supported by important actors of the neighbourhood, Jeugdhuis Chicago Maison de Jeunes, the Comité Alhambra, the asbl Chicago back or the centre LD3 / Het Anker, who have actively participated in the elaboration of the project. Other local partners will be involved.

"In this logic, the programming of the temporary occupation will be determined by a call for projects involving the associations and inhabitants of the surrounding neighbourhoods. To guarantee this collective and participatory dynamic, pali pali will identify the associations active in the neighbourhood and the nature of their involvement in the project," explains Khalid Zian, president of the Brussels CPAS. In addition to this major project, the site will also host the DREAM project in two pavilions next to the main building, which focuses on the recovery of unsold food and its delivery to associations active in the field, as well as training modules for the Brussels-Ixelles police zone.
The full programme will be announced shortly and the opening of the gardens is already planned for the summer
.

Jeugdhuis Chicago Youth House is one of the 8 youth centres of D'BROEJ vzw " BRUSSELS ORGANIZES FOR THE EMANCIPATION OF YOUNG PEOPLE ". D'Broej vzw wants to contribute - by developing initiatives in free time - to the emancipation (both individual and collective) of children and young people from the most disadvantaged neighbourhoods in Brussels. Taking their environment and experience in the Brussels neighbourhoods as a starting point, we want to create spaces for positive experiences, in which the talents and skills of young people can flourish.

Alhambra Committee The Comité de quartier Alhambra aims to improve life in the neighbourhood and to defend the interests of the inhabitants and shopkeepers, not only towards the authorities but also with regard to the people of the neighbourhood among themselves. It has initiated a project for urban vegetable gardens at the intersection of Rue de l'épargne and Rue Saint Jean Népomucène.

Chicagoback is a solidarity project led by the inhabitants of the "Chicago" neighbourhood (with citizen initiatives) which was created during the first containment in 2020. The association organises the distribution of food parcels, hot meals, regular street outreach and the distribution of clothes and blankets.

LD3 / Het Anker LD3 is a collective of three service centres with a social economy licence, active in various Brussels neighbourhoods, including Het Anker in the Béguinage district. LD3 vzw builds self-help, solidarity-based and participatory neighbourhoods in Brussels to enable everyone to age successfully. A self-help neighbourhood is not only created with elderly people, Het Anker also develops services that are at the service of all inhabitants, such as its neighbourhood restaurant.